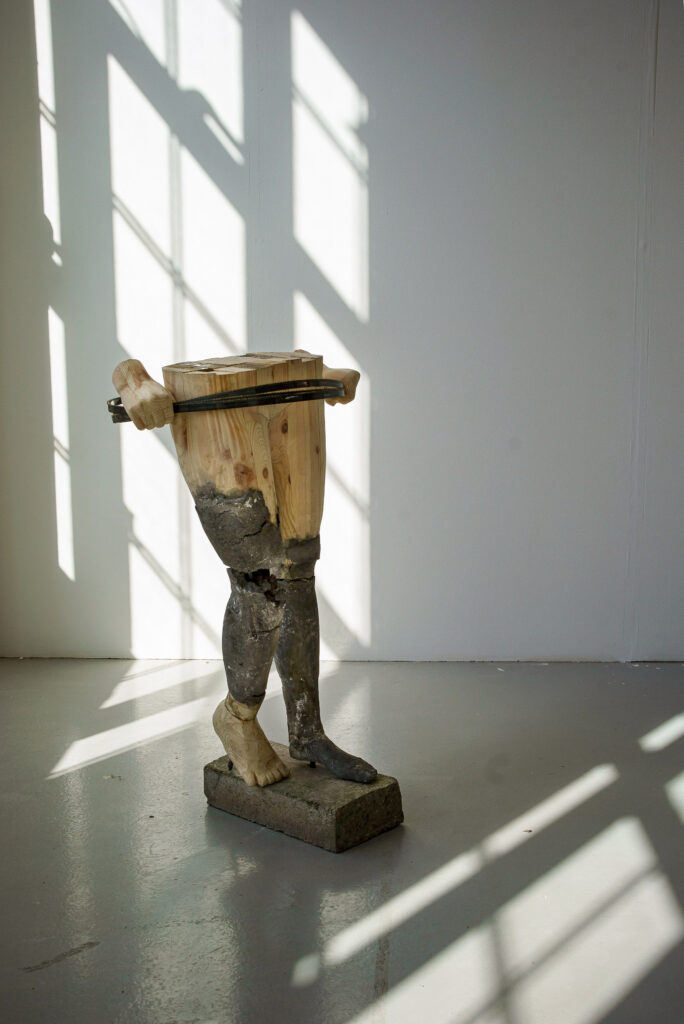 The matter of wood and the matter of the body are both dynamic fields of relations. Through the transformative and non-linear act of woodcarving, my work aims to rebirth politics behind the workshop. Focusing on the historical influence to construction that thinks not only of gender and sexuality but also race, ethnicity, labour and class.

Woodcarving is characterised by a subtractive and destructive process. The inherent capitalism and power of anthropocentrism is also established through processes of removal; the appropriation of land, the removal of civil rights and of identity. Applications of Queer Theory allow the labour in the background to slip into the foreground where we can witness capitalism fragmenting.

The chainsaw is a tool with the potential to function both as a means of destruction and creation. Using it for constructive rather than destructive ends my work aims to stimulate a more mindful consideration of the not-so ‘neutral’ materiality of wood.

Recycling debris and undesirable wood is not just a means of sustainability but a means of decolonising the field of woodcarving. My approach to carving refuses to assimilate with just one ‘authentic’ method. My use of the chainsaw and the mixing of mediums is a queering of the ‘authenticity’ of the mallet and chisel which was so valued by Western woodcarving purists.

Critiquing sculptural conventions led me to the term contrapposto — the shift of the weight of the body on one foot. My playful approach to woodcarving inspired me to caricature the gesture, creating an artwork which is hula hooping the bandsaw. “Playing” brings the body back into the forefront to concentrate on the ontological experience of making. 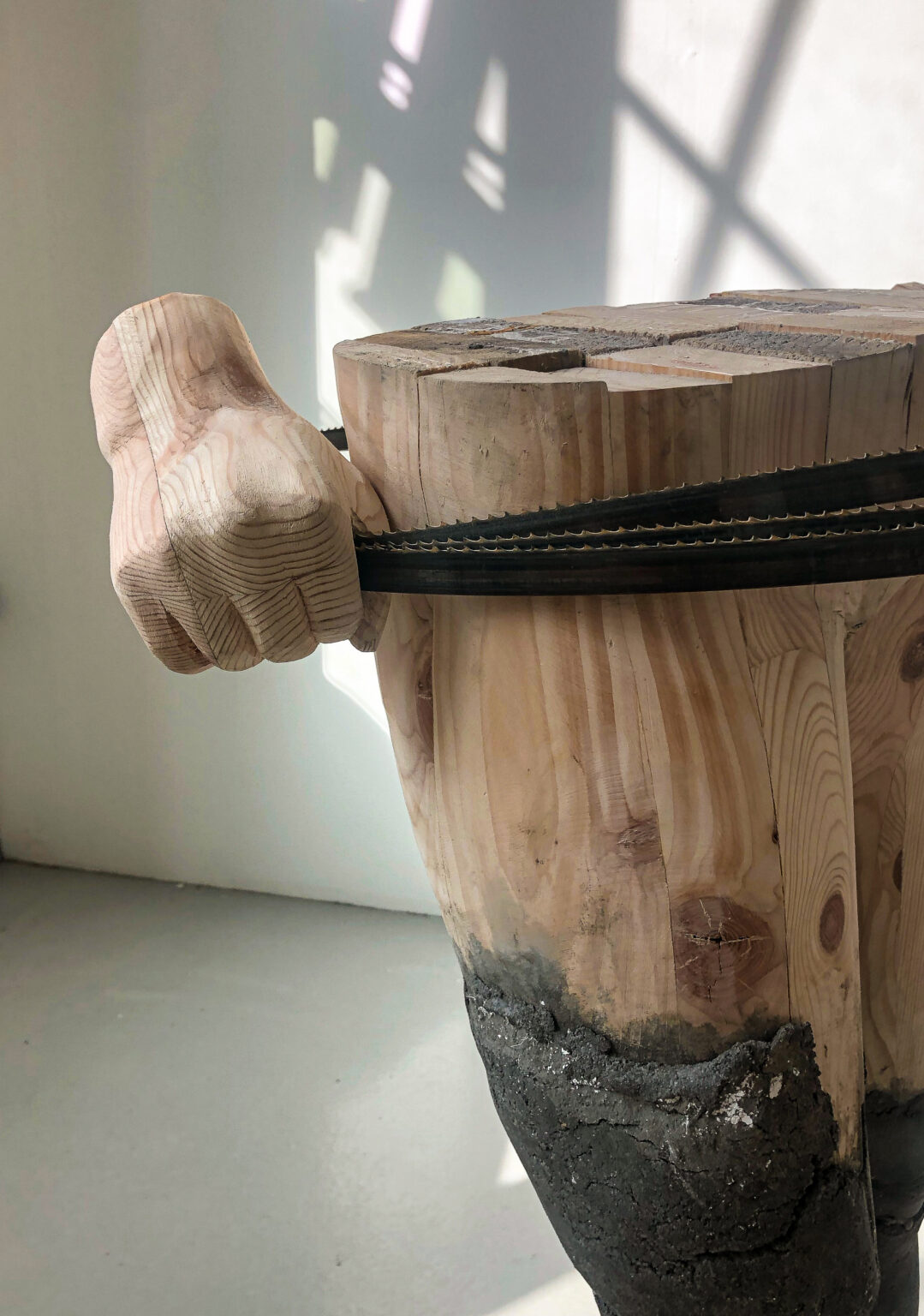 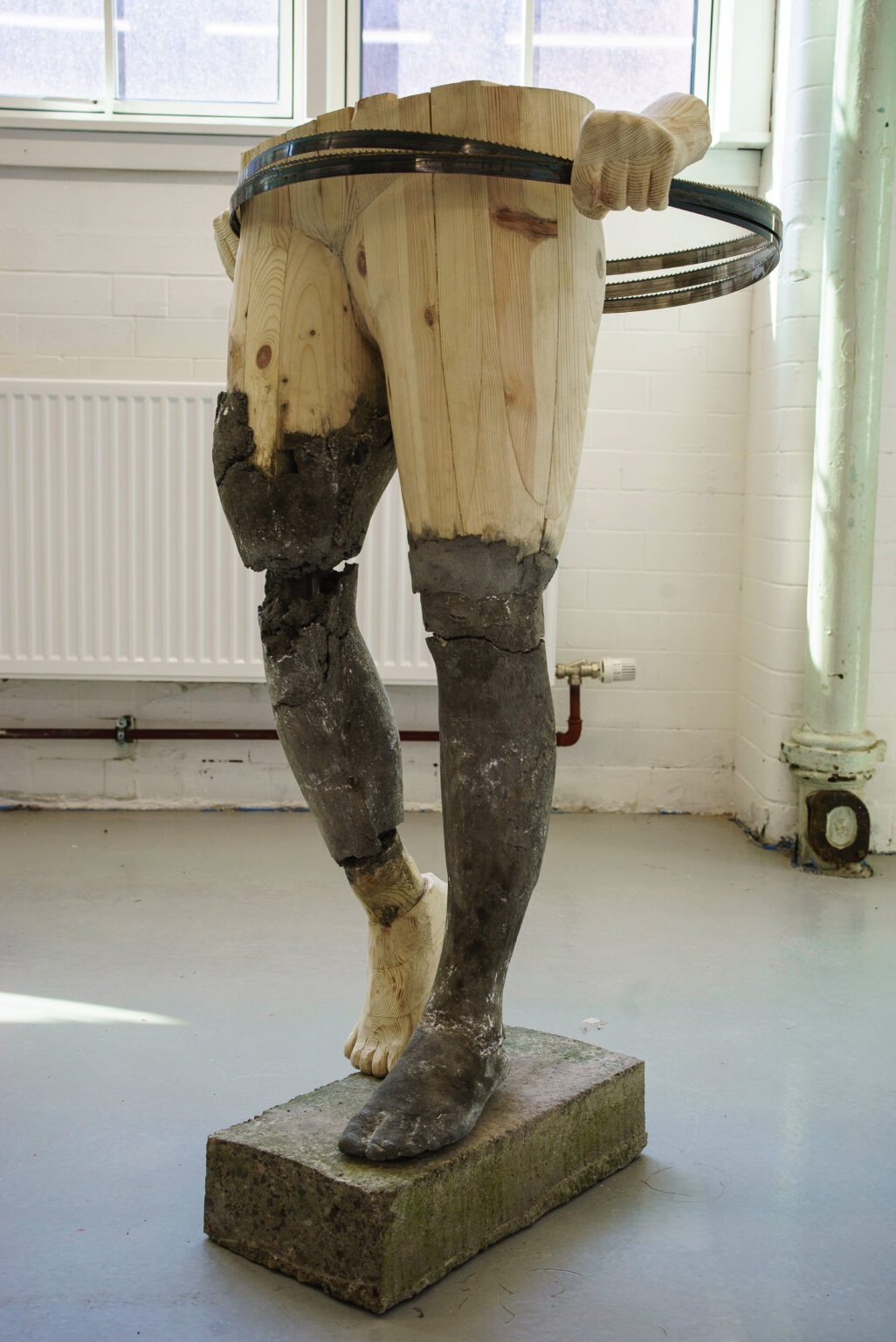 The valuing of ‘nobler materials’ such as marble or exotic woods is rooted in colonial ideology and is predominantly unsustainable and unethically sourced. Marxist undertones in Sara Ahmed’s Queer Phenomenology raise questions of the conditions of liveability for those people in the background of the wood industry. Violating the rights of indigenous people, deforestation is harmful to the planet and is historically engrained with the slave trade.

Reflecting on the carvings from antiquity, eurocentrism has privileged the patriarchal paradigm for white male sculptors. I reconceptualised elements from Bernini’s Ecstacy of St Teresa to open up the phenomenological territory. Thus creating a space where orientations can render even when “queer” may not be part of the immediate scope. 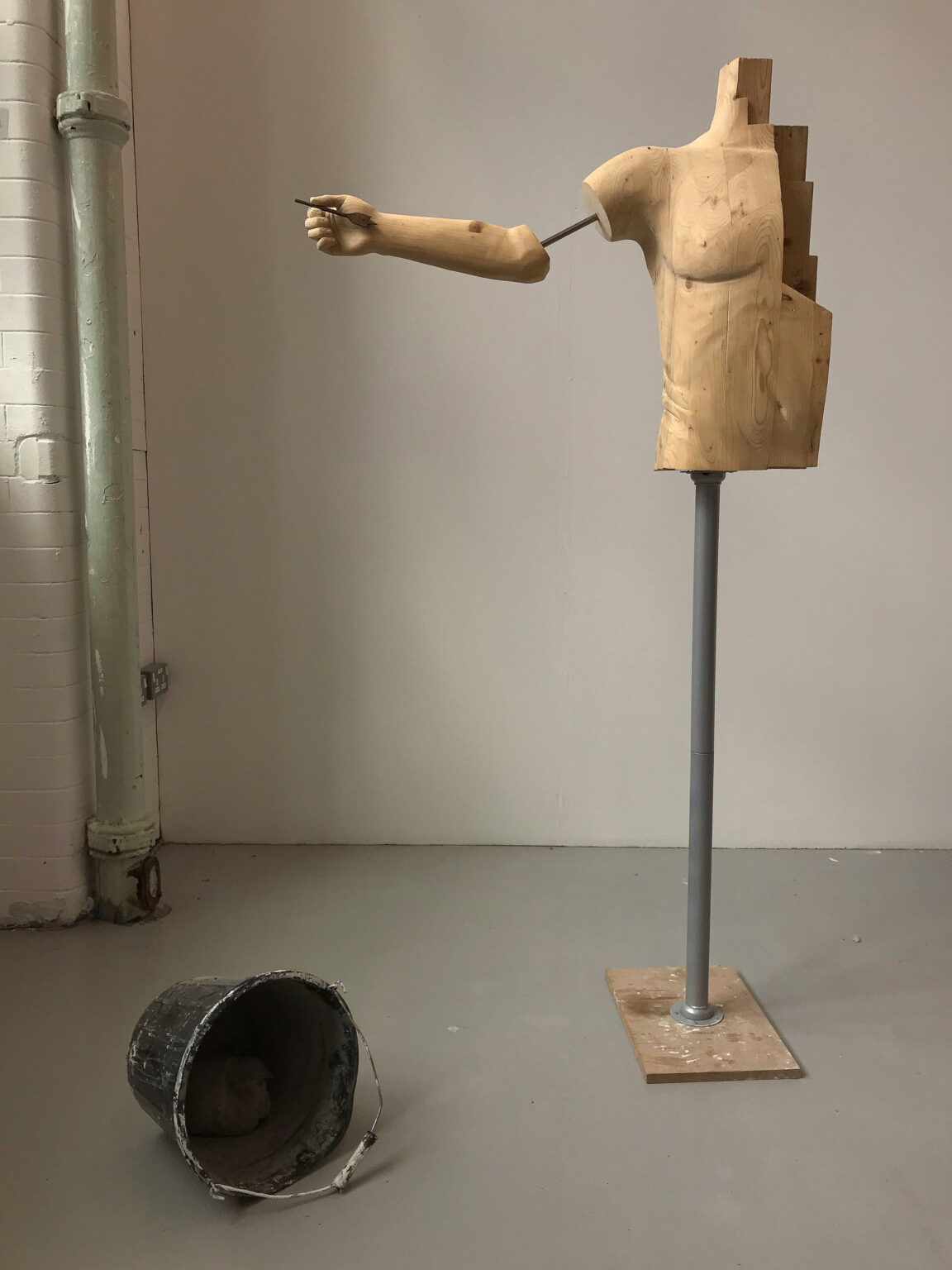 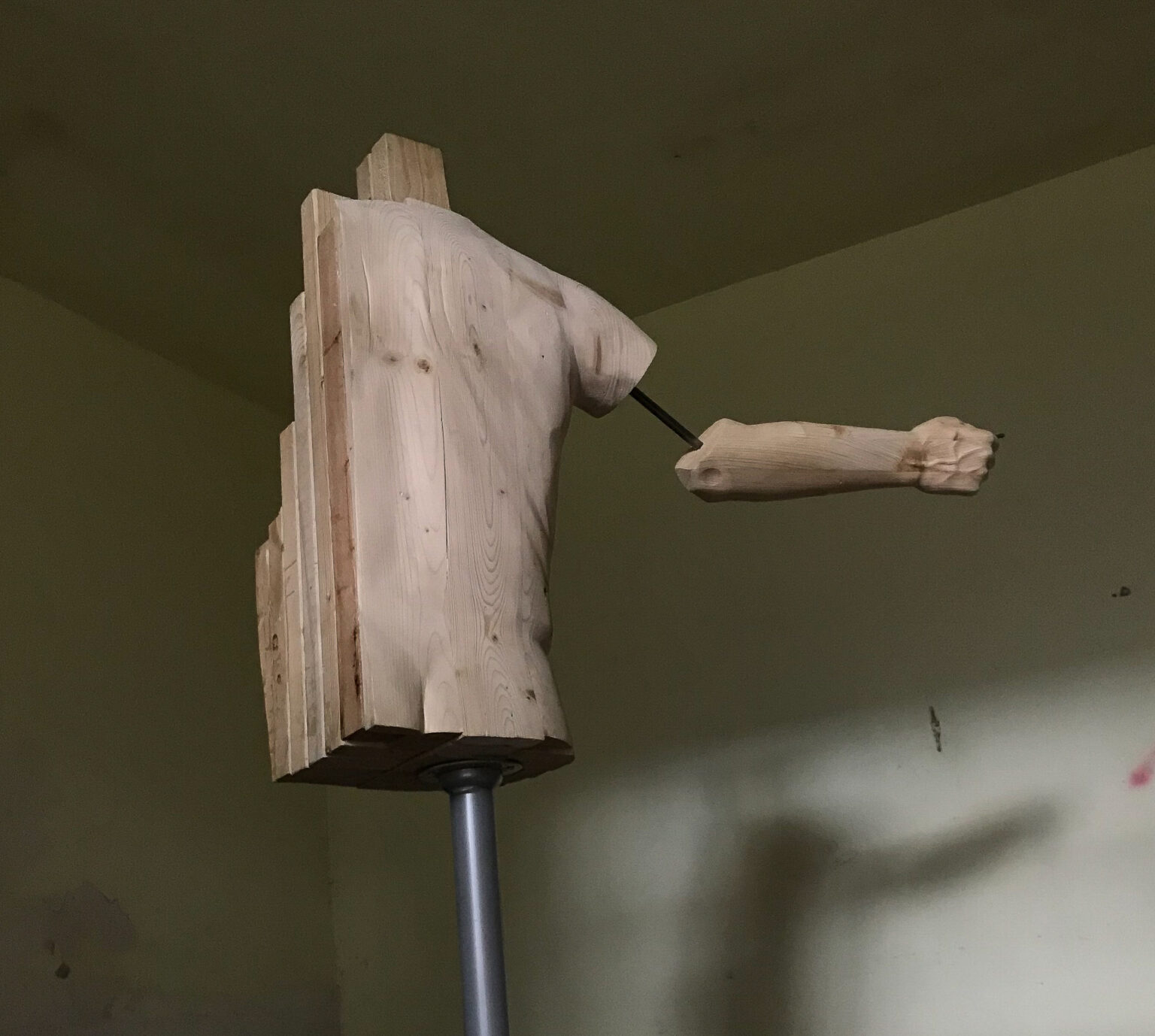 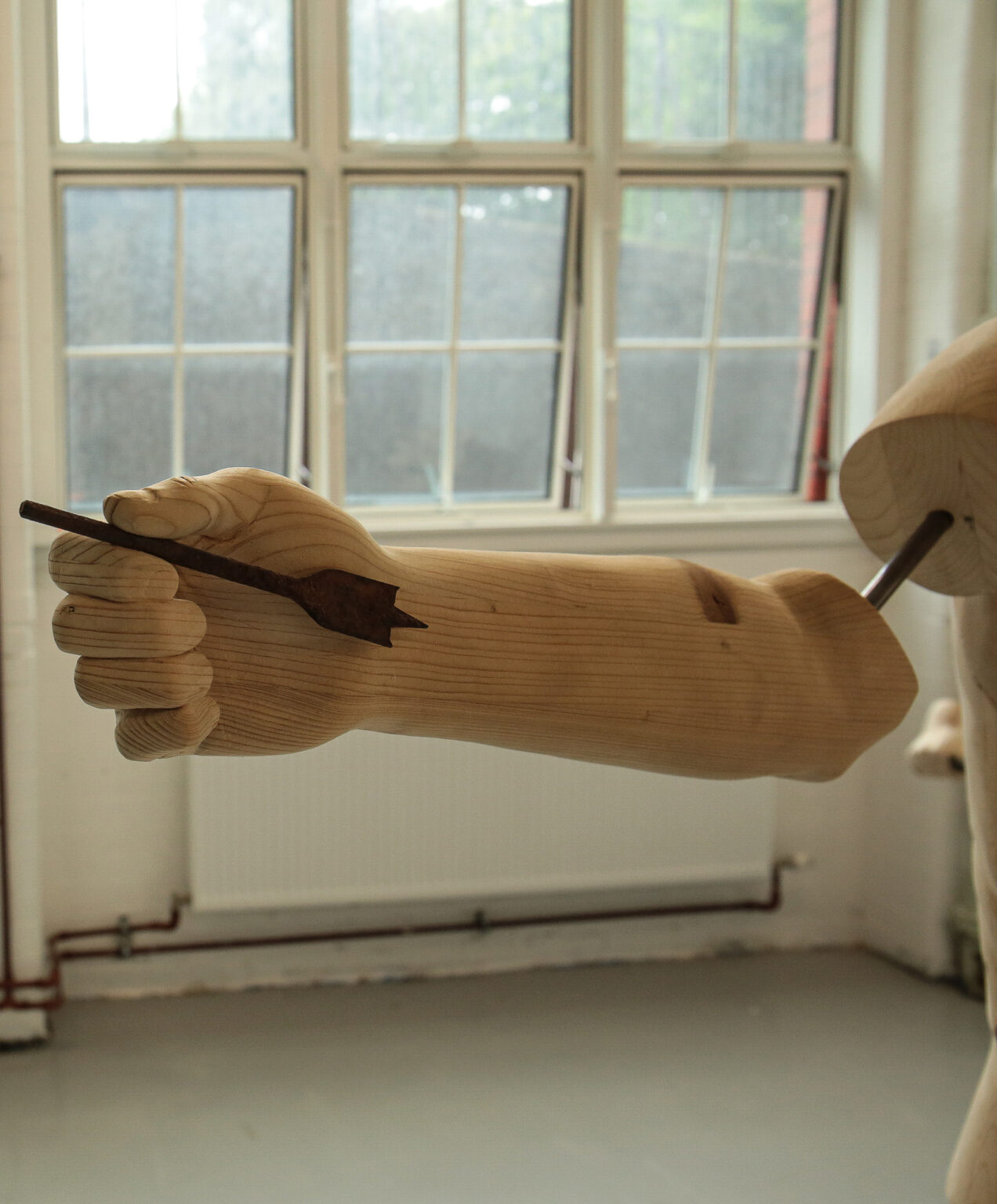 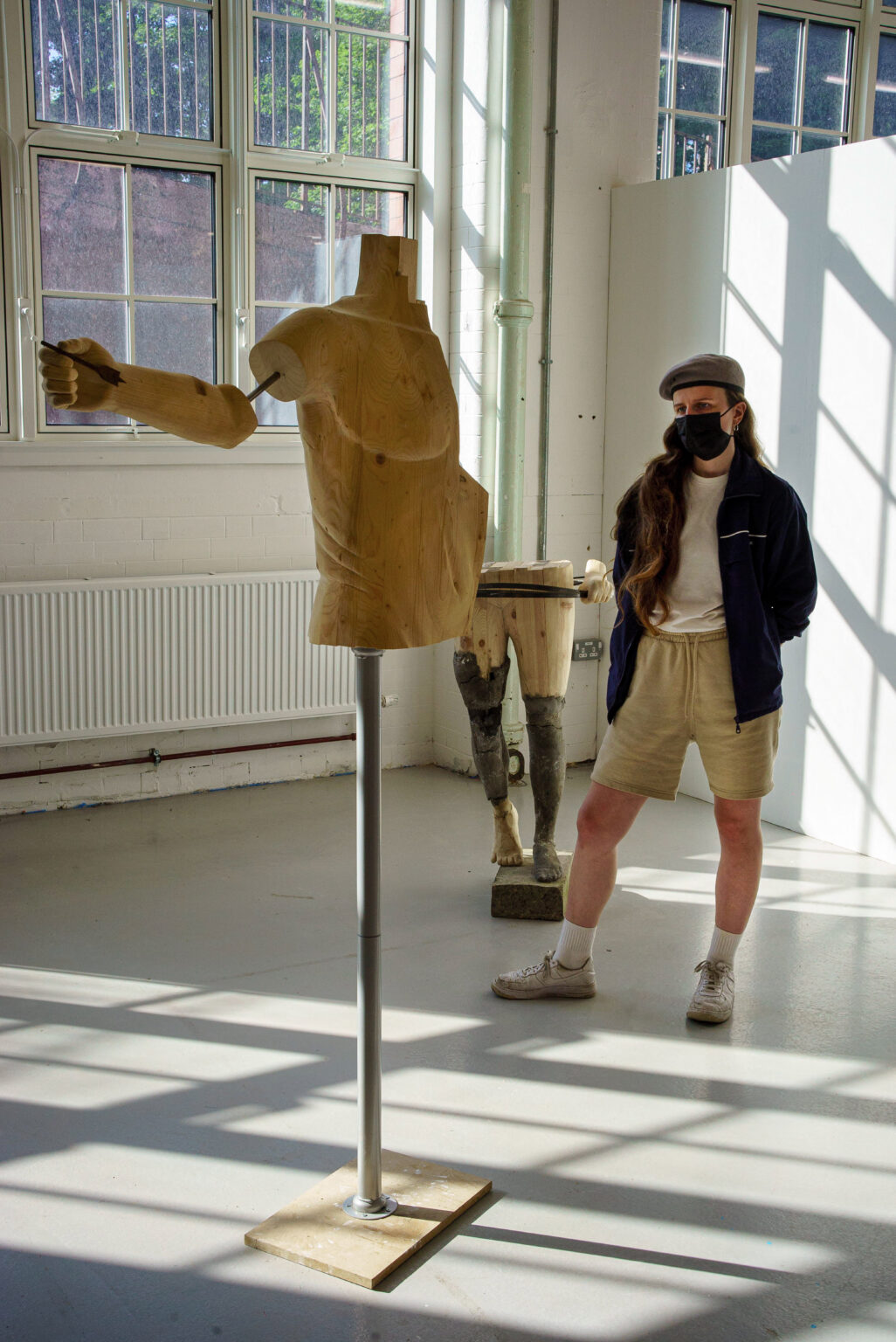 Both classical marble sculptures and modern monuments have always been used to enforce political structural violence and heteronormative ideals. But these statues are in constant need of maintenance and restoration over time. Without the intervention of unseen labourers in the background the sculptures would surely collapse. Showing that nothing is eternal not even marble, metal, or the powers of capitalism.

My carvings are raw and unvarnished. Eventually the wood will crack, the metal will rust and the concrete will crumble to reflect this temporality. By embracing the fragmented aspects of the body, my figurative works resist binarised categorisation with no clear gender or defined level of completion. Inhabiting the “in-between” troubles Western ideals of normalcy which uphold binaries to privilege particular conceptions of the body. 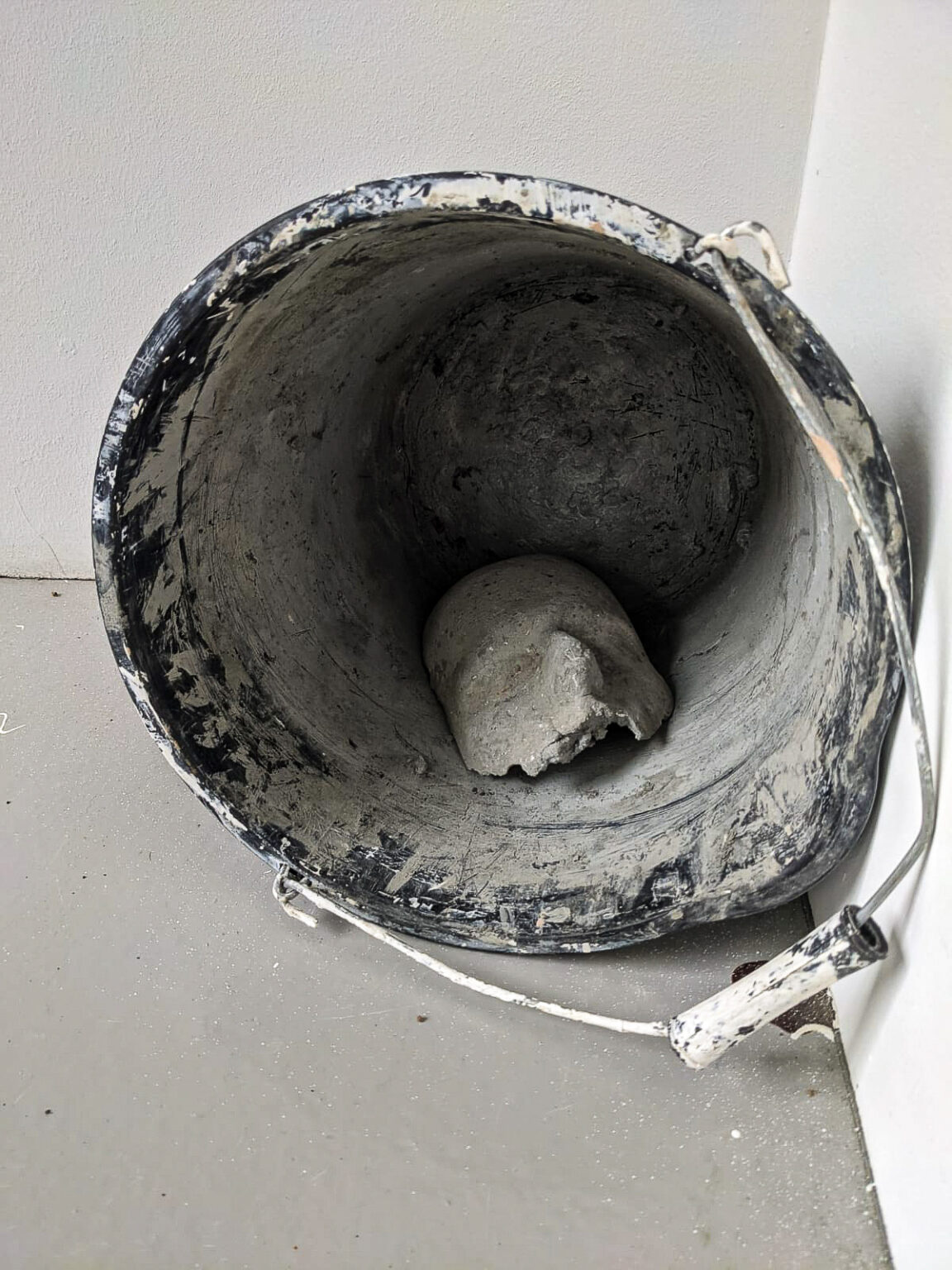 1 of 4
Previous Next
Close 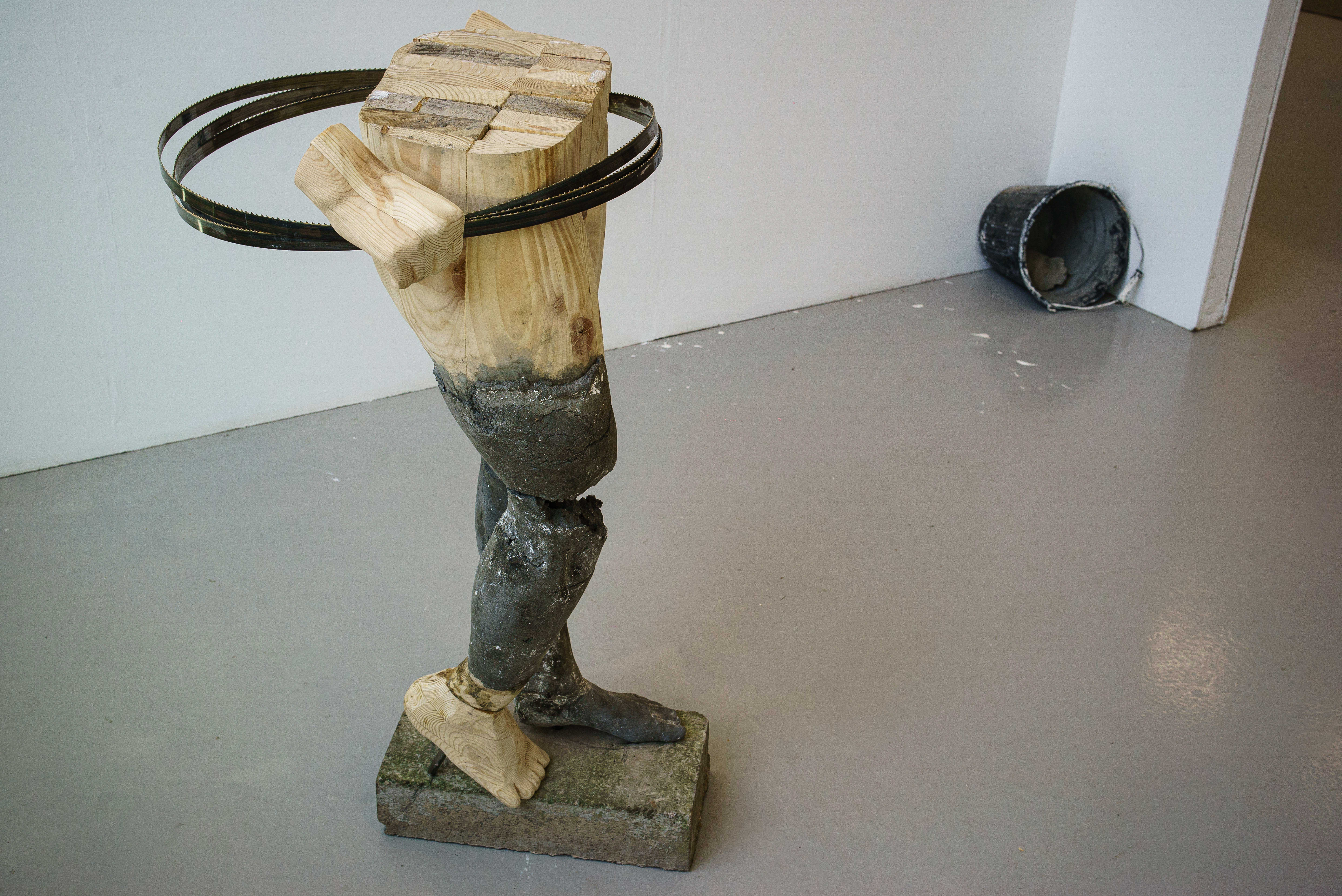 2 of 4
Previous Next
Close 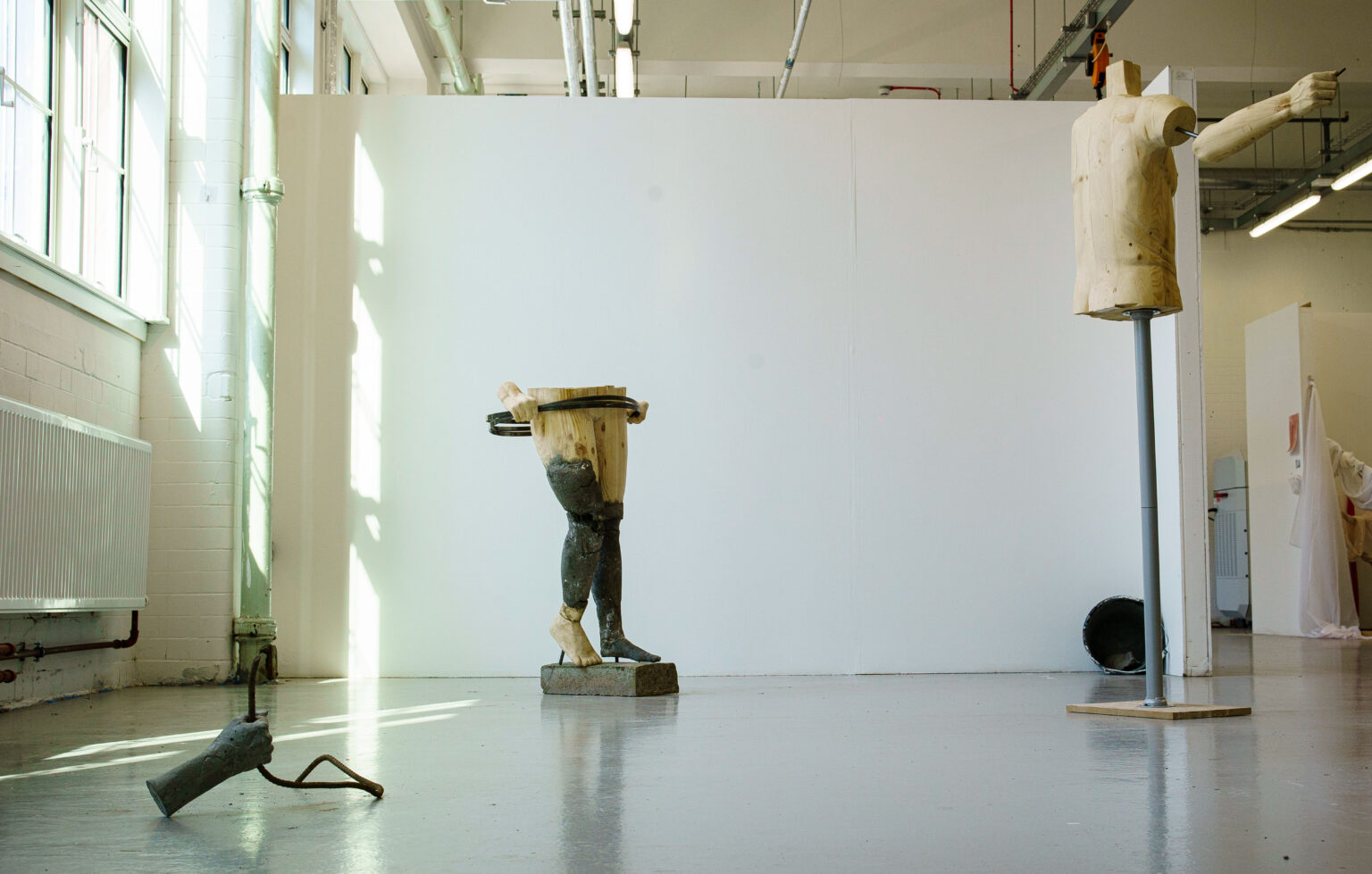 3 of 4
Previous Next
Close 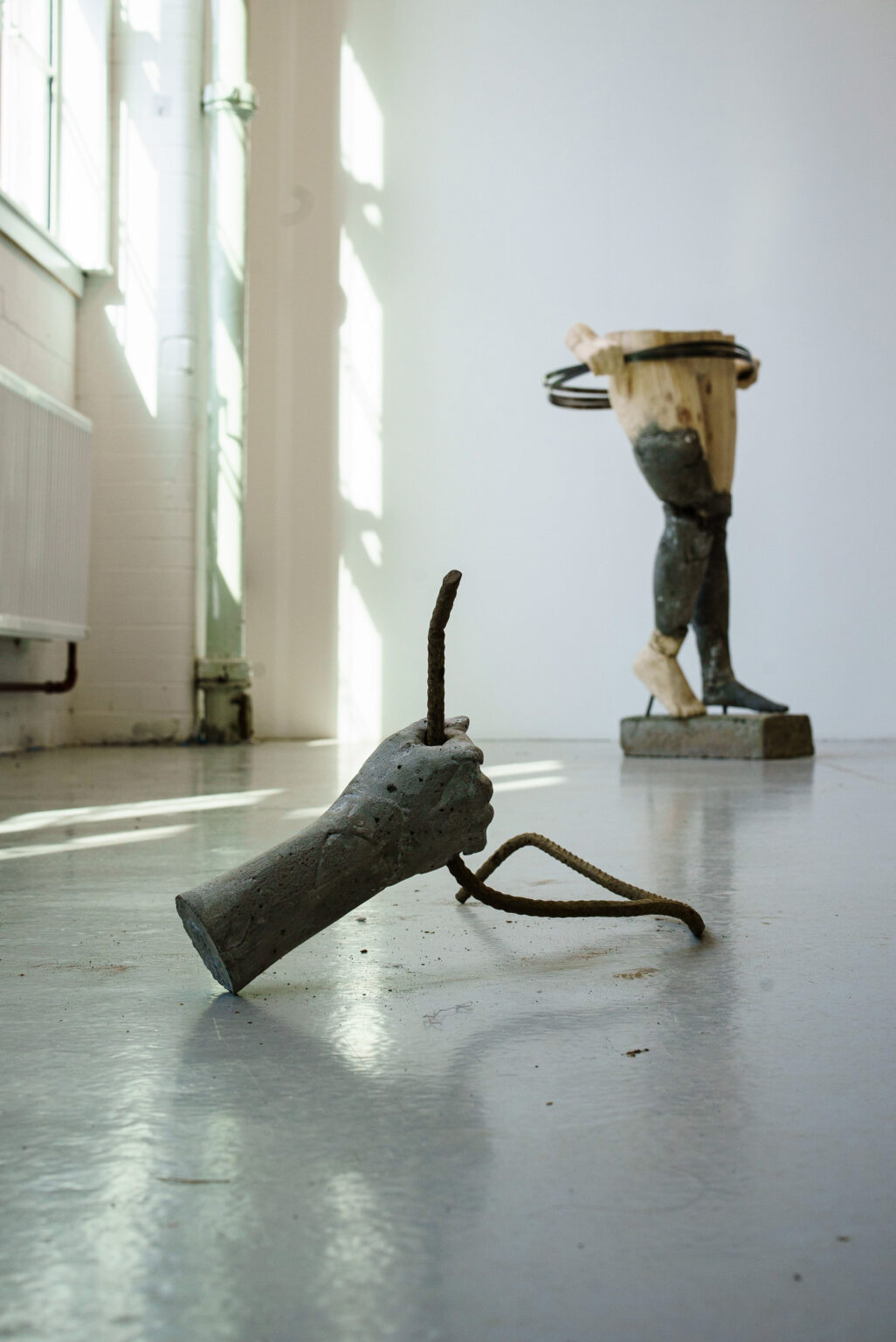 4 of 4
Previous Next
Close